If You Build It, They Will Stay: Sacramento Arena Plan Unveiled by ICON Venue Group

When the basketball-loving people of Sacramento finally exhaled on May 2, it was only a matter of minutes before they were holding their breath again.

The Maloof family that owns the Kings had decided to stay, having succumbed to monumental pressure that was coming from almost every side as they attempted to move to Anaheim. But as was made immediately clear by the owners and the NBA, this would merely be a stay of execution unless a new arena was built. 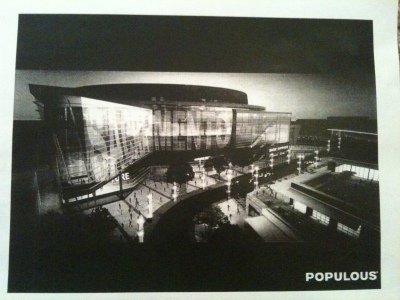 Twenty-four days later, the beginnings of a plan are finally in place. The Taylor/ICON group that has been working with the city of Sacramento since early February completed its feasibility study this week that was intended to determine whether an arena was possible in Sacramento.

END_OF_DOCUMENT_TOKEN_TO_BE_REPLACED

Posted on May 23, 2011 | Comments Off on Latest Linkage: Warriors shaking things up, draft heating up, Bulls and Thunder cooling down

Quick linkage here before I turn in for the night.

A press conference with new Golden State consultant/executive board member Jerry West awaits in the morning, and that’s something I certainly didn’t see coming. There had been rumblings for quite some time that West could join the Warriors, and I have even reported on the potential of a West arrival last June when it looked as if Larry Ellison would be buying the team instead of Joe Lacob and Peter Guber.

But it looked as if the Warriors were done shaking things up. They added former agent Bob Myers to their front office as an heir apparent to GM Larry Riley, then extended Riley himself for two years (with the third year a team option). The coaching search ensues after Lacob & Co. decided not to bring Keith Smart back, and the leader of that race appears to be former Cleveland coach Mike Brown.

In other words, there is basketball life outside of the playoffs at the moment.

END_OF_DOCUMENT_TOKEN_TO_BE_REPLACED

Comments Off on Latest Linkage: Warriors shaking things up, draft heating up, Bulls and Thunder cooling down

Latest Linkage: Talking Legacies in Laker Land, Playoffs and the Return of the Kings

Posted on May 11, 2011 | Comments Off on Latest Linkage: Talking Legacies in Laker Land, Playoffs and the Return of the Kings

LOS ANGELES – There’s a lot to get to here, and I am – once again – guilty of leaving the most loyal of NBA Confidential visitors without an update for a full fortnight.

The dateline should give some indication of the latest topic, as the end of the Lakers’ reign is as big as hoops stories get this time of year. And considering so many members of the media (yes, including yours truly) had June tickets to cover the Lake-Show, the spectacularly sudden way that it came to an end has led to some compelling content.

So before offering up the standard linkage to the latest (15) stories, I wanted to share a slice of the incredible theater that has been taking place down in LA-LA land. As I wrote today, Lakers center Andrew Bynum was put on blast by a litany of Laker greats after his cheap shot on Dallas’ JJ Barea on Sunday.

Hall of Famer James Worthy was among them, and I caught his interview with ESPN Radio’s Mason & Ireland in Los Angeles just after getting into town on Monday. Jerry West and Magic Johnson were both highly critical, but Worthy’s take came with a level of venom that was just incredible.

Bynum was eventually suspended for five games (which he’ll sit out at the start of next season – whenever that is) and fined $25,000 for the way he left the court (including taking his shirt off as part of the Defiant Fashion Line), but backlash like this meant he paid the even steeper price of his putting his reputation in jeopardy.

If you’re more the visual sort, check out this picture from the Dallas Morning News that I probably stared at for at least three minutes while flying from Dallas to LA. There’s a lot to see here, from the looks on the faces of the Mavs players as Bymum passes to the fact that Dallas owner Mark Cuban appears to be hollering at Bynum and the irony that the one and only Ron Artest – of all people –  is helping escorting his teammate away from a ho 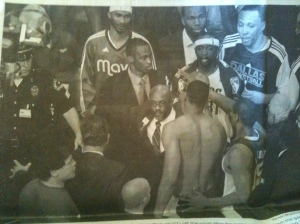 On a much more pleasant note, it’s surreal how the Sacramento situation has turned around. After the May 2 announcement that the Kings would remain for at least one season, the swell of support is on the rise.

I hear there was quite a party tonight in California’s Capitol, where former Kings flew in to celebrate and local legends, Tesla, even came in to perform in front of a crowd of approximately 6,500. According to my friends at The Sacramento Bee, the Maloofs – who were pushing for a move to Anaheim before being forced to return – were mostly cheered and lightly booed. They invited Sacramento Mayor and former NBA player Kevin Johnson to represent the team at the draft lottery in New Jersey on May 17, a solid PR move to help with perceptions that there remains a rift between the two camps. 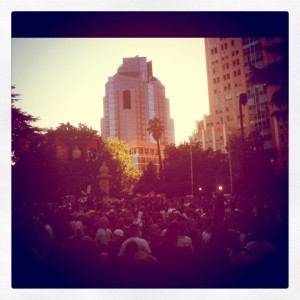 Now at long last, the links. At SI.com…

* Bynum apologizes, but remains outspoken for desires with Lakers (May 10)

* Right or wrong, finger of blame pointing at Pau Gasol (May 8)

* Jackson apologizes to Maloofs for comparison to McCourts (May 2)

* Thunder need Perk of old to return (May 2)

* Kings to stay in Sacramento (May 2)

* Will Maloofs act on frustrations, take NBA to court? (April 30)

Comments Off on Latest Linkage: Talking Legacies in Laker Land, Playoffs and the Return of the Kings